Kayaking in the sea caves in Phang Nga Bay has become very popular, too popular to be honest. This nature tour has turned into a very crowded mass tourism destination.  However, the bay is very large and the hordes go to just a few islands.  They don’t visit the islands where we go kayaking.

How were the sea caves of Phang Nga Bay formed?

Non-marine origin limestone occurs due to diagenesis (“dia” is Greek for “through”. “Genesis” is Greek for beginning or origin). Sediments are deposited initially as unconsolidated debris. Consolidation comes about gradually due to dewatering (not in the type of limestone in Phang Nga Bay) and/or because of cementing with a binding material (clay, calcium, lime). The rock is altered and gradually changes into limestone through this process called diagenesis. Rocks that have become solid in this way are described by ending with the word “stone”. Like, limestone, mudstone, and sandstone.

Almost all sedimentary rock is layered. Reef limestone is generally not layered. They develop as an atoll or fringing reef. Lime is continuously deposited by the coral animal (polyps).

This limestone is a monomineralic (one mineral) rock consisting of a single mineral (calcite) which can make up 95% of the rock. Other rocks found in marine limestone include dolomite, siderite, quartz, feldspar, mica, and various clay materials. 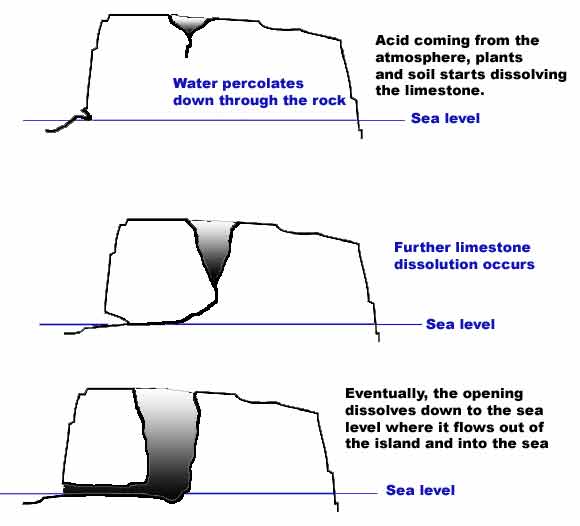 When they die, they leave behind either complete units or skeletons. Sometimes the former organism is recognizable (fossils). Other times, it is completely broken down.

Karst is limestone that features internal drainage. Most areas that have karst formations also have heavy rainfall and a thick bed of limestone with a lot of underground flowing water.

Acid dissolves the mineral calcite which is the primary elemental in limestone. Pure water is not acidic and therefore doesn’t dissolve limestone. However, the atmosphere contains carbon dioxide. As rain falls, it picks up some of this CO2 and becomes acidic. Due to the biological activities involved in soil production, there are high levels of CO2 in the soil. When rain combines with soil, it therefore becomes more acidic.

Water sets in pools on top of the islands. It percolates down through cracks in the rocks. It dissolves limestone as it goes, thus enlarging the cracks.

The sides of this “sink hole” erode and dissolve. If a sea cave happens to connect with this hole, the enlarging process is sped up by the action of the seawater.

There are certainly many hidden “hongs” in the islands that are not accessible by sea canoe since they don’t connect with a cave. The only way into these sinkholes is from the top.

Paddle Asia avoids the well-known hongs of Phang Nga Bay as they have become too popular. Day trip tourists from Phuket visit these hongs in mass. There are actually traffic jams in the caves! It’s far from being a nature tour.

We do go into some hongs, which are just as stunning as the famous ones, and they are not visited by others.

Explore Phang Nga Bay’s world-famous islands, caves, and mangrove forests in a way that is completely different from other tour operators